What is visceral fat?

It’s tempting to think that all body fat is the same and equally detrimental to our health. In reality, we have three main different types of fat tissue (also called adipose tissue), with excessive amounts of one type in particular, visceral fat, being linked to negative health outcomes:

This is the type of fat stored just beneath our skin. You may be able to feel subcutaneous fat on your limbs or on the surface of your belly. Subcutaneous fat has (no pun intended) many roles, including: storage of fat for energy, regulation of body temperature, and physical protection of muscles and bones.

Subcutaneous fat is not necessarily bad for our health. In fact, it may even confer some health benefits. Some studies suggest that a higher absolute amount of subcutaneous fat is linked to better insulin sensitivity, a lower risk of diabetes, and healthier blood fat (triglyceride) levels.

Visceral fat (sometimes called intra-abdominal fat) is the type of fat tissue stored deep in your abdominal cavity, where it surrounds internal organs such as the liver, intestines and pancreas. You cannot directly feel visceral fat, as it is stored behind the abdominal wall. Nevertheless, excessive visceral fat gives rise to a higher waist circumference.

Visceral fat is much more metabolically active than subcutaneous fat. In addition to cushioning organs, visceral fat acts as an ‘endocrine organ’ – it secretes various hormones, including those that alter our fat and sugar metabolism. Visceral fat also releases various inflammatory molecules (e.g. cytokines), which can lead to damage of our blood vessel lining, liver, muscle and other tissues.

Due to these effects on fat and sugar metabolism and inflammation, visceral fat is associated with a greater risk of metabolic (e.g. type 2 diabetes) and cardiovascular disease (e.g. heart disease).

We also store fat in our bone marrow. Scientists are still figuring out the function of so-called marrow adipose tissue, but it’s thought that this type of fat play a role in maintaining bone and producing various blood cells (haematopoiesis). 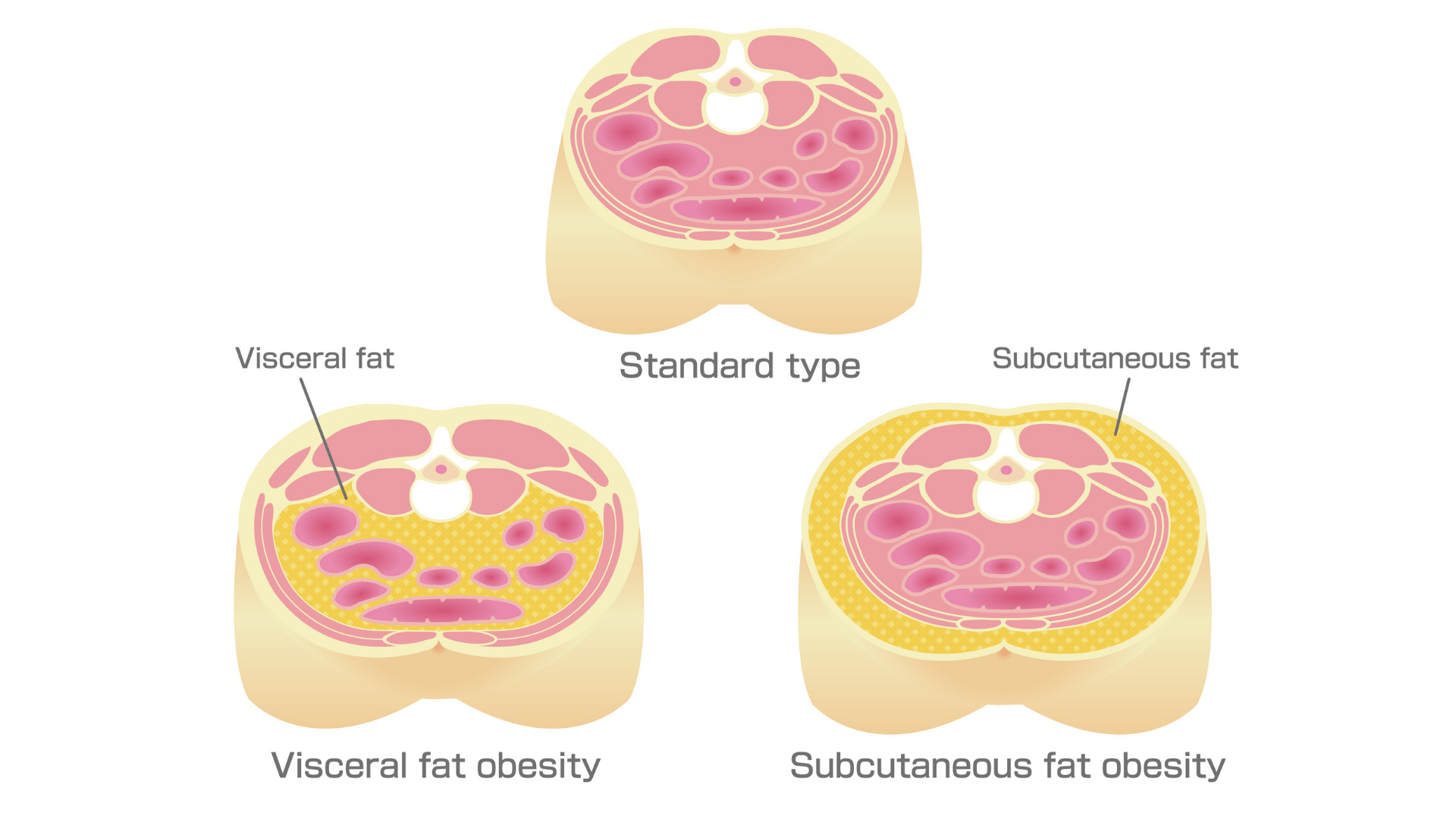 A cross section of the abdomen - visceral fat (yellow) is behind the muscles of the abdominal wall (pink) and surrounds internal organs.

Why is too much visceral fat bad for us?

Excessive visceral fat is associated with an increase risk of disease

It’s now well established that higher amounts of visceral fat are linked to an increased risk of:

As you may recall from a previous blog about your fasting blood glucose levels, insulin is the hormone that allows tissues to take up and use sugar (glucose) circulating in the bloodstream.

Higher amounts of visceral fat leads to the accumulation of macrophages and increased levels of cytokines. Furthermore, adipocytes (fat cells) themselves can also secrete various pro-inflammatory molecules, leading to inflammation.

In turn, inflammation may cause damage to cells (cellular stress) in various tissues. For example, inflammation within blood vessel walls makes them more susceptible to forming blood clots and fatty plaques (atheromas). This mechanism may partly explain how visceral fat increases the risk of cardiovascular disease.

Inflammation within the liver, skeletal muscle and other peripheral tissues also worsens these tissues’ sensitivity to the effects of insulin. Inflammatory damage to cells is also associated with premature aging.

The answer to this still remains to be fully elucidated.

As explained above, one leading theory is that inflammatory cytokines (such as TNF-alpha and IL-6) produced by visceral fat directly impair insulin signalling. This phenomenon is especially pronounced in liver and muscle tissue, tissues where insulin has a particularly large effect on glucose and fat metabolism.

Another theory is based on a process called lipotoxicity. Like your intestines, which are also located deep in your abdomen, your blood supply to visceral fat drains into a part of the circulation called your hepatic-portal system. This takes blood directly to the liver for nutrients to be metabolized.

The issue arises, however, when you have excessive amounts of visceral adipose tissue. Visceral fat releases free fatty acids (FFA) and other fat metabolites directly into the hepatic-portal system. These then quickly accumulate in the liver (and other organs) causing it to store inappropriate amounts of fat and making it less sensitive to insulin. 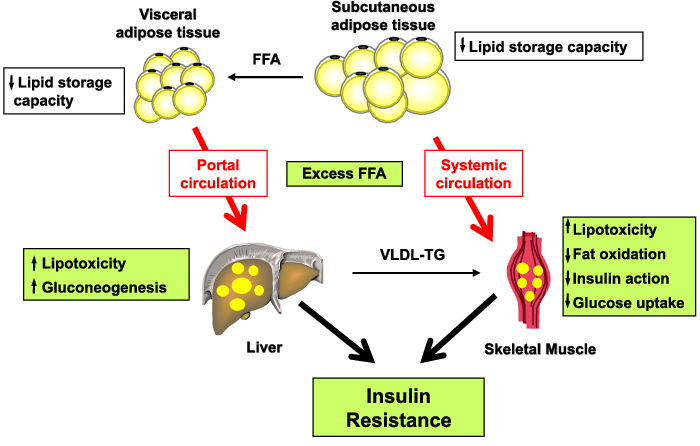 It’s a complicated picture, but the balance of your sex steroid hormones (including testosterone and estrogen) influences your pattern of fat deposition and can affect how much visceral fat you carry.

Consequently, an imbalance of your sex hormones can lead to greater deposition of visceral fat. This, in turn, results in poorer insulin sensitivity.

Given their different reproductive physiology, the exact relationship between hormonal imbalances, visceral fat and insulin sensitivity differs considerably between men and women.

Several studies suggest that, in men, low testosterone levels are associated with an increased amount of visceral fat.

Under this relationship, both reduced testosterone production and/or excessive estrogen production can lead to more visceral fat tissue. Check your Testosterone Level and Estrogen Production Traits for more information.

In contrast to men, higher levels of testosterone (and other androgens) seem to be associated with greater amounts of visceral fat in women.

On this note, studies suggest that post-menopausal women are more likely to experience accumulation of visceral fat.

As you may recall from the Estrogen Production blog, circulating levels of estrogen (estradiol) drop off dramatically during the menopause as the ovaries stop producing estrogen. Given that testosterone and androgen production remains fairly stable during the same period, the ratio of testosterone to estrogen increases. This then leads to greater visceral fat deposition.

How does visceral fat affect our balance of sex hormones?

Unfortunately, too much visceral fat can also upset further upset your balance of sex hormones. In turn, this may lead to more visceral fat accumulation and further worsening of insulin sensitivity. It’s a prime example of a vicious cycle or feedback loop.

One reason for this vicious cycle is that visceral fat acts as a metabolically active, endocrine organ – it secretes various hormones and other molecules that can alter the metabolism of sex hormones.

This has three simultaneous effects:

3) It lowers the ratio of testosterone to estrogen.

All three of these may lead to the deposition of visceral fat and, thereby, poorer insulin sensitivity / insulin resistance. 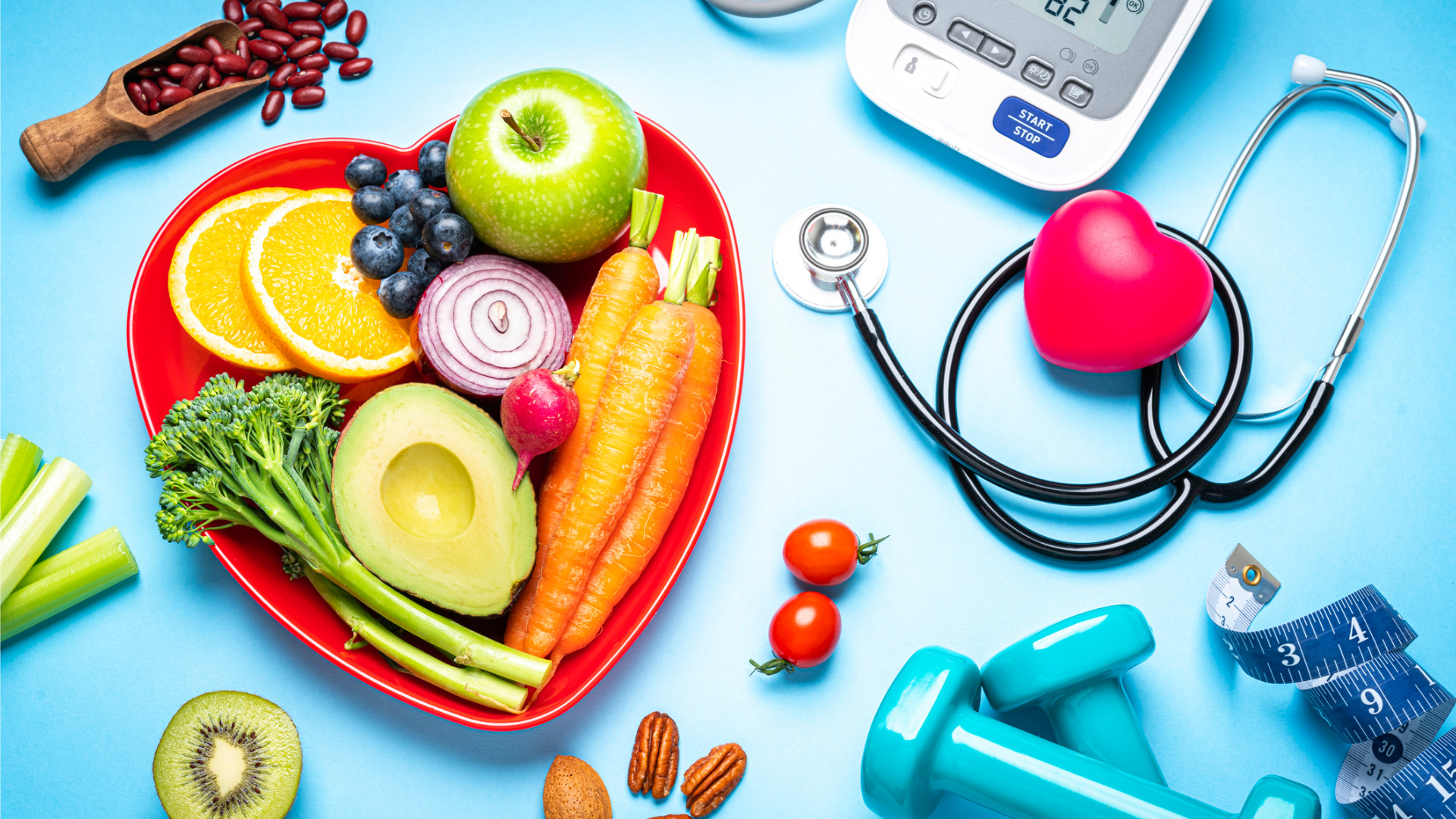