How we do know when it’s time to go to sleep?

The answer to this depends on multiple factors, including our work routine, our stress levels and whether we’re naturally more of a ‘morning lark’ or a ‘night owl’.

Nevertheless, and even with the advent of artificial light, most of us are typically awake during the day, when it is light outside, and asleep at night, when it’s dark. This coupling of our sleep pattern (or sleep-wake cycle) to levels of light is regulated by an important hormone: melatonin.

Recent research suggests that melatonin also coordinates the secretion of insulin with our sleep-wake cycle. Our gene variants influence this relationship between melatonin, sleep and insulin release, with some variants linked to poorer insulin function and higher blood sugar levels.

Often dubbed ‘the sleep hormone,’ melatonin is a chemical messenger that is produced at night and makes us sleepy.

It also coordinates the control of other physiological parameters with our sleep cycle, such as our blood pressure, metabolism and body temperature.

Aside from regulating processes associated with our sleep cycle, melatonin also plays a role in immune function and protection against damage from free-radicals. 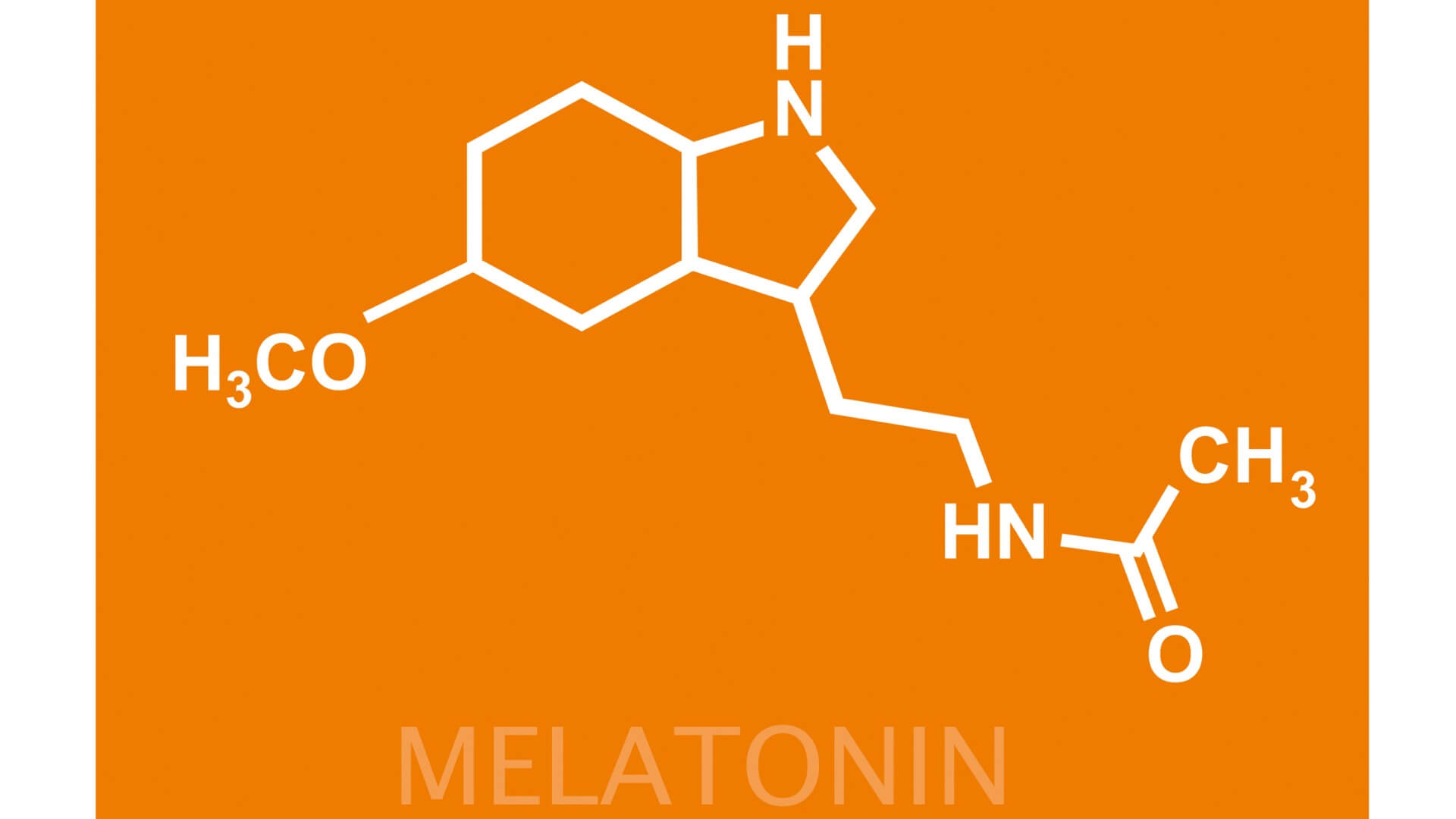 How is melatonin produced?

Melatonin is produced by a small gland located deep in the centre of the brain called the pineal gland.

For this reason, melatonin is sometimes (jokingly) referred to as the “hormone of darkness” or the “Dracula hormone”. How is melatonin production coupled to daylight and darkness?

There is a nifty mechanism that ties melatonin production to light levels. When it’s dark, less light falls on our retinas – the light sensitive layer at the backs of our eyes. This drop in light levels is then signalled to another part of the brain called the suprachiasmatic nucleus (SCN).

During darkness, the SCN stimulates the pineal gland to produce and secrete melatonin. This, in turn, enters the bloodstream and has various effects in the body, including making us feel sleepy, reducing our core body temperature and, as we’ll shortly discover, inhibiting the release of insulin. By contrast, bright light (both sunlight and artificial light) causes the SCN to suppress the production of melatonin by the pineal gland.

Levels of melatonin therefore stay high in the bloodstream during the night-time, until the re-emergence of daylight in the morning begins to inhibit melatonin secretion. 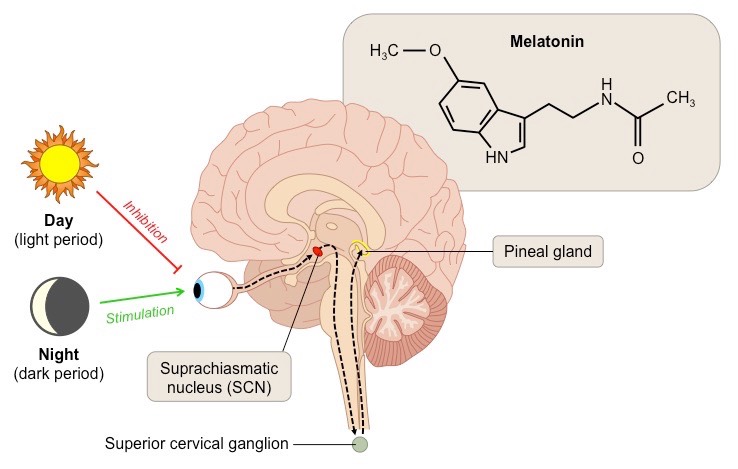 How does melatonin affect insulin secretion?

Melatonin inhibits the secretion of insulin.

As you may recall from the previous trait blog, insulin is a hormone produced by the beta cells of your pancreas. These beta cells express a receptor for melatonin, the MT1B melatonin receptor, which is coded for by your MTNR1B gene.

When levels of melatonin in the bloodstream are high during the night, melatonin binds to the MT1 receptor and suppresses the secretion of insulin by pancreatic beta cells. As a result, your circulating levels of insulin drop overnight.

Why does melatonin affect insulin secretion?

As explained in the previous ‘Insulin and your blood glucose levels’ blog, a major action of insulin is to facilitate the movement of glucose from the bloodstream into tissues. Insulin, therefore, causes levels of glucose circulating in your bloodstream to fall.

A steady overnight supply of glucose in the blood, however, is required by your brain, which is very active during sleep. Unlike other tissues e.g. skeletal muscle, brain tissue does not require insulin to take up glucose from the bloodstream for fuel.

By inhibiting insulin secretion during night time then, melatonin helps to keep blood glucose levels adequately high, ensuring your brain is well fuelled during the night.

How do variants of your MTNR1B gene affect insulin secretion?

Your MTNR1B gene codes for your MT1B melatonin receptor, which is found on the surface of beta cells in your pancreas. When melatonin binds to this receptor, it inhibits the release of insulin into the bloodstream.

Different variants (or alleles) of your MTNR1B gene affect how many MT1B melatonin receptors your beta cells produce (or ‘express’). In turn, this alters the extent to which insulin release is suppressed by melatonin.

One allele of the MTNR1B gene, the G allele*, increases the amount of MT1B receptors expressed on the surface of your pancreatic beta cells. As a result, carriers of the G allele are more responsive to the effects of melatonin.

When melatonin binds to these greater number of receptors, it more strongly inhibits the secretion of insulin. Consequently, people with one or more copies of the G allele have lower circulating levels of insulin during night time.

* - the G allele that results from one particular variation (or polymorphism), rs10830963, of the MTNR1B gene.

What are the consequences of carrying the G allele of the MTNR1B gene?

As established above, people with the G allele of the MTNR1B gene have lower levels of insulin during the night.

Insulin normally facilitates the uptake of glucose from the bloodstream into tissues, such as the liver, skeletal muscle and fat. Therefore, when insulin levels are lower, blood glucose levels become higher. In isolation, this may not pose much of a health risk.

The issue arises, however, when people with the G allele eat a large, carbohydrate-rich meal late in the evening, when insulin secretion is suppressed by melatonin. In this scenario, blood sugar (glucose) levels may become excessively high, as lower levels of insulin struggle to transport glucose from the bloodstream into tissues.

As explained in the previous trait blog, if high blood glucose levels persist over time, the risk of metabolic disease such Type 2 diabetes and the metabolic syndrome increases.

On this note, several studies have shown the G allele to be associated with an increased risk of Type 2 diabetes and higher fasting blood glucose levels. Those who work night shifts may be particularly at risk, as such individuals are more likely to eat during the evening (when melatonin levels are high and insulin secretion is inhibited).